This Federal style table is constructed primarily with genuine Mahogany and with Ebony and Holly accents. The figured wood insets are made from Asian Satinwood and laced with Holly stringing. The drawer sides are curly maple.

Each holly bellflower on the legs was carefully cut and inlaid after burning the tips in hot sand (an ancient technique that has been in use for hundreds of years).

The marquetry roses were created entirely by hand. Eighteenth-century methods were employed in the execution of the roses: the small roses were cut using an eighteenth-century tool called a Chevalet, which the artist built. The top roses were done with a handheld fret saw. The artist carefully chose natural woods, of which he sawed all the veneer, finishing it at 1/16” and selecting the grain and color to accentuate the roses. Hundreds of pieces were cut and carefully pieced together to create this mosaic. There was no dye, stain or paint used on any of the inlaid roses. The woods used are, box elder, pink ivory, maple, cherry, poplar, Indian rosewood, lignum vitae, holly and ebony.

Traditional joinery was used throughout, including hand cut mortise and tenons, tapered sliding dovetails and half blind hound’s tooth dovetails for the drawers. Hidden within is also a secret compartment.

The knobs, whose shape mimics the edge profile of the top, are mahogany with a bent piece of  holly stringing inset.

The Finish is Danish oil with a hand rubbed French polish.

There is approximately 450 hours in this piece.

Best of Show and Peoples Choice 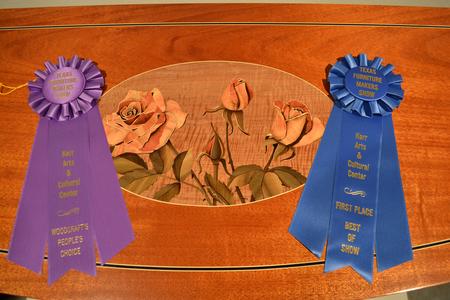 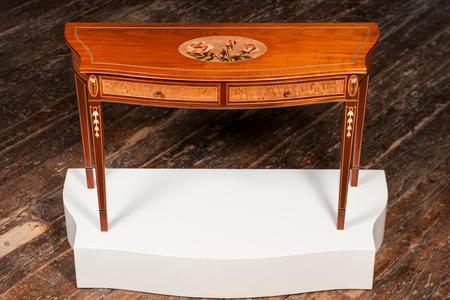 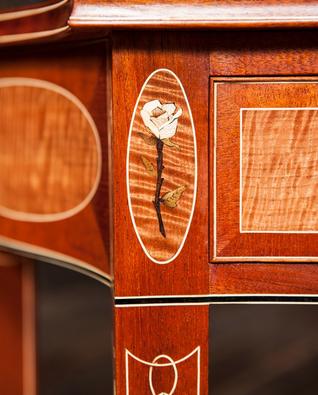 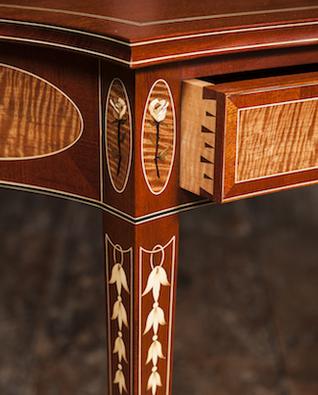 There is no paint, dye or stain used in the creation of these roses. 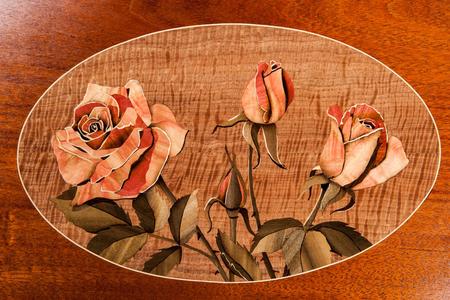